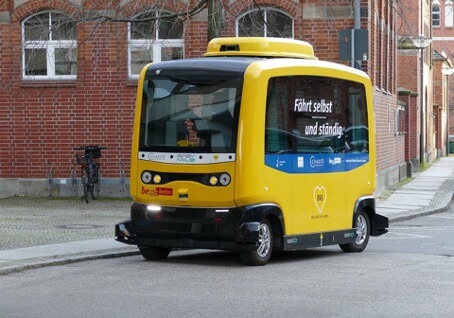 The German law on autonomous driving came into force on July 28th. With this act, the legal framework was created so that autonomous driving of level four specified operating areas in public road traffic is possible in regular operation.

An overview about the different levels of autonomous driving can be found at the homepage of the European Parliament: https://www.europarl.europa.eu/news/en/headlines/economy/20190110STO23102/self-driving-cars-in-the-eu-from-science-fiction-to-reality

As the Ministry of Transport and Digital Infrastructure (BMVI) reports, Germany will be the first country in the world which allows autonomous cars at the road in everyday life independent from any research project. The act allows the use of autonomous driving only for specific vehicles, for example Shuttle-traffic or People-Mover. It also regulates the conditions under which use is permitted. You can find more information at: https://www.bmvi.de/SharedDocs/DE/Artikel/DG/gesetz-zum-autonomen-fahren.html
This act is only a part of the German plan to get a pioneering role in the field of autonomous driving. Already on June 21th 2017 the act for autonomous driving, which regulates the autonomous driving at level three, came into force. Furthermore, Germany enables many different research and development projects for autonomous driving. An Overview of the innovation’s projects can be found at: https://www.testfeldmonitor.de/Testfeldmonitoring/DE/Home/home_node.html
With the different measures Germany want to become a role model for innovation in the field of autonomous driving. The law on autonomous driving is only intended to serve as a transitional solution until uniform standards have been adopted at international level. The BMVI has therefore advocated international standards so far and will continue to do so in the future.